A Truly Magical You Matter Experience-December 29, 2017 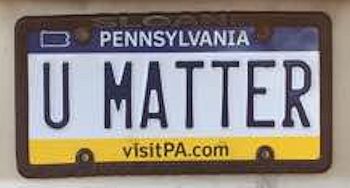 As some of you know, after last year’s Marathon I ordered a custom license plate that read “U Matter” as another way of spreading our message.

I never could have predicted how that license plate would lead to the most unexpected blessings.

A dear friend, Paul, was in his last days of life after a three-year battle with cancer. He was receiving hospice care at home. I pondered what I could offer beyond prayers, food, and flowers to support Paul and his extraordinary wife, Julie, through this tender passage.

One morning, when Julie told me the hospice nurse said Paul would likely be gone by Christmas, I thought how lovely it could be for him to hear Christmas carolers one last time. But without any relationship with a choir, I had no idea how to make this happen.

Hours later, as I was walking from the drugstore back to my car, a woman approached me, introduced herself as Laura, and said she had seen my car and the “U Matter” license plate around town. She said the words touched her deeply each time she saw them. In fact, once she was driving with her teenage daughter who was going through a hard time, and when they saw the license plate it prompted an important discussion between them about mattering. They took it as a positive sign that things would get better.

I said, “Well, if you like the license plate, you’ll love this” and I handed her a You Matter card. Laura’s face lit up. Then when she told me that she’s on the board of our local Meals on Wheels, I told her about the You Matter Marathon and pulled out a bag of 450 You Matter cards from my car.  I suggested that she distribute them to the Meals on Wheels clients. Her eyes grew wide, her smile radiated.

And then, feeling both her goodness and her receptivity to the You Matter message, I trusted my intuition and asked, “Do you by chance belong to a church?”

“Well, I’m looking for carolers to sing to my friend who is dying of cancer; he’s in his final days.  Laura looked at me and said, “My daughter is in a choir. She and her friends wanted to find an opportunity like this. I’ll have carolers there this week.”

I could hardly speak.  So we hugged instead. 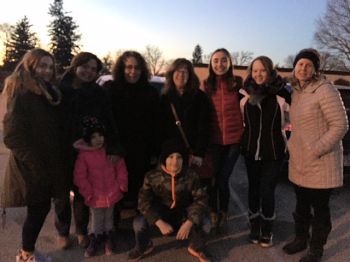 Two days later eight people whose names I don’t know but whose faces and voices I’ll never forget, gathered in front of Paul and Julie’s home and sang Christmas carols, starting with Deck the Halls. Julie opened the living room windows so Paul could see and hear the holiday serenade. They both wiped tears from their eyes. Paul died six days later.

The You Matter magic is real.