Be kind, for everyone you meet is fighting a great battle.
―Ian Maclaren

Dear YuMMies (my term of endearment for YMM participants):It’s been another robust week for You Matter Marathon enrollment!

Thanks to some notable media coverage including a radio interview with the Morning Crew of Philly’s WXTU – (my favorite country station!) a powerful blog post by author, YuMMie, and all around wonderful guy Brad Aronson, and a spotlight article in the Philadelphia Citizen our community has 15,107 participants, and 117 Ambassador organizations from all 50 states (thank you, Alaska!), and 20 countries. Some new Ambassador organizations include: Chattahoochee County Middle High School, CTCA Eastern Regional Medical Center, and The Compassion Network, LLC.

What You Can Do Now

Interview with the Inspiring “Godmother” of the You Matter Marathon 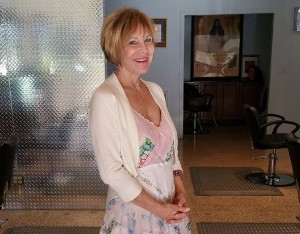 As mentioned in a previous post, the idea for the You Matter Marathon began when a colleague, Nedra Fetterman, gave me a You Matter card. She had picked it up from a reception table at a conference she had attended. She later learned that another conference attendee, Vicki O’Grady, a therapist based in Florida, had placed  the cards there for others to take. Turns out Vicki has been giving out You Matter cards in the Orlando area for years and having a ton of fun doing it. Vicki graciously shared her You Matter journey with me and I am delighted to share it with you.

Vicki, I understand you give out thousands of You Matter cards a month in Orlando, Florida. That’s spectacular. When and how did this come about?

I started out holding up signs in traffic that said “Thank you” and “Sorry”.  I then gave out Post-it notes in the shape of hearts everywhere I went and started holding up a heart sign in traffic at intersections.  A friend of mine, a street preacher, holds up a sign that says “Be encouraged” and told me that a man told him his sign kept him from committing suicide. Because I have been in that dark place myself, I decided to change my sign to “You Matter” because I think that so many people don’t know that they do matter and want to give up on life.  When Robin Williams died, I was devastated and came up with the idea of the You Matter business cards.  I distribute about 10,000 a month.

Who do you give the cards to?

I give them to random people everywhere
I put them on cars
I put them in the envelopes with my bills (yes, I still use checks)
I leave them in restaurants and other stores, and
I mail them anonymously to certain celebrities and other people who inspire me

Can you share a story or two of a particularly moving reaction you’ve received from giving out a You Matter card?

A lot of people hug me and say “God bless you.”  Once I was in a grocery store parking lot and saw a young guy who seemed like he was looking to break into a car.  I watched him as he peered into empty cars.  Another lady walked up to me and said “It looks like he’s up to no good” to which I agreed.  He was headed toward a liquor store and I walked up to him and asked if I could give him something.  He said “yes”.  I gave him the card and told him that he matters and it’s going to be ok and he does not have to worry.  I don’t know what happened after that but it made a big difference to me.

What has the impact of giving out cards been on you?

It gives my life meaning and makes me feel that I matter.  It is the greatest joy in my life other than my family and friends.

Is there anything you would like to say to people participating in the You Matter Marathon?

I hope each person reading this will feel the impact of their lives in the world.  Each one of YOU matters to me.

Thank you for your inspiration, Vicki.

You can reach Vicki through Facebook at the You Matter Compassion Project.